When my oncologist was doing her ward rounds on Monday 11th September 2017, I was told that I would be able to go home. The discharge would be the following day Tuesday 12th September 2017. After hearing this news, I called Kirsty to let her know. I also made arrangements with Stuart to come and pick me up.

There was a little delay around the actual discharge, but I really should have known better, especially the amount of times I have been discharged from the Western General Hospital Edinburgh. The delay was nothing to do with the wonderful staff on Ward 8 who nursed me, in fact it was actually down to the Western General’s Pharmacy.

I was first admitted to the Western General Hospital on Thursday 17th Ausgust 2017 after a phone call from my oncologist urging me to get across. I was upset being told this news for several reasons, but also due to the Action for Prestonhill press conference I had arranged for the next day, Friday 18th August 2017. I had set up Action for Prestonhill with Gillian Barclay and after calling Gillian, I knew that the press conference would go well and was in safe hands.

So, I was in the Western General Hospital Edinburgh from Thursday 17 August to Monday 21 August 2017. I spent this time on Ward 8 and all the staff were excellent. My oldest son Jack was down from Aberdeen and he was staying with his girlfriend Heather and her family in Livingston. Jack had sent me a few text messages to ask me how I was feeling etc. Then I remember falling asleep and then being woke up by Jack when he arrived with Heather. It was a nice surprise and it was so nice to see the both of them.

On the Monday morning after going through further tests and procedures, it was time for a wee rest. After resting it was time to pack as discharge time was approaching fast.

I can recall saying to Kirsty that it felt great to be going back home so that I could have that quality family time with her and wee Nathan. I knew that I would be exhausted, but still great to be back home to my own surroundings. So on Monday 21st August 2017, I was finally discharged and sent home.

It always feels great to be back home and in your own bed after you have been in hospital due to illness. This isn’t a moan or a complaint, but the noise on a busy cancer ward like that can be unbelievable at times. So I was so glad I had my iPad, iPhone and headphones with me. I was then able to chill out by either listening to music or watching movies and catching up with TV programmes.

It was only a matter of a few days and we were back on the phone to the Western General Hospital on Sunday 27th August 2017 as I was experiencing excruciating pain. I have explained before that I have an extremely high pain threshold and that 9 times out of 10 I can usually deal with it. But this day I couldn’t deal with it and I was feeling really ill.

We were told to go to Ward 2 first for medical assessment. I got a lift over from my niece Ann Marie and after a few hours in Ward 2, I was taken up to the Oncology Ward 4. I was taken to a 2-bed room in the ward and I was sharing it with a man from Edinburgh called David.

So, from Sunday 27 August 2017 to my discharge date on Monday 11th September 2017. I had a number of various tests, scans etc to try and get to the bottom of what exactly is causing me so much grief. I had numerous tests from: bloods; CT scans; MRI scans; biopsy’s etc.

After a couple of days, myself and David were moved from our comfy wee room to a room for 4 patients. George was already in the room that we moved into and he was another good guy. Throughout the time I was in that room

with David and George we would be joined by other patients usually for 24 hours. Despite us all being ill, we had a good laugh.

It was great to get so many visitors, and I really appreciated everyone that came to see me and also for the many gifts, cups of coffee I was taken for etc.

Kirsty brought wee Nathan across a few times and seeing them both really cheered me up. Nathan enjoyed eating my sweets and drinking my juice, the exact same thing I would do when I would visit my mum when she was ill in hospital.

One morning after I had went to the Maggie’s Centre,

I was starting to feel really tired so it was time to go back to the room so that I could rest/sleep before my visitors came to see, a parcel was lying on my bed. When I opened it, I was really delighted to see that some had sent me a really smart fruit bowl from Marks and Spencer’s. There was also a really lovely card in it with really kind words. 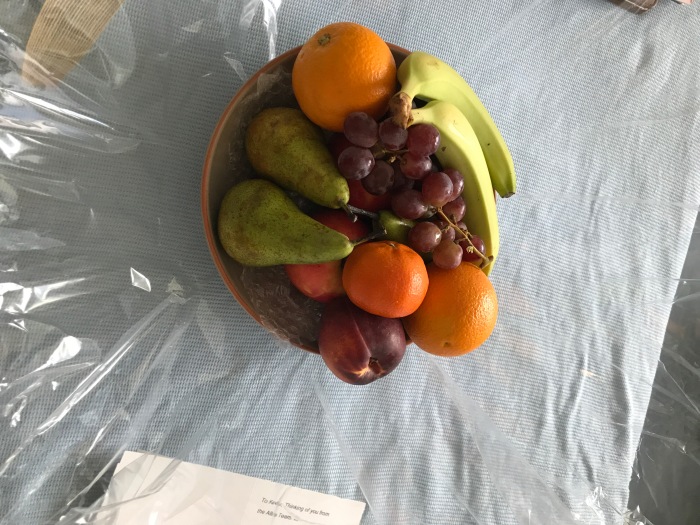 This came from the staff at: SAMH for Scotland’s Mental Health;

based at Woodmill Road Dunfermline. My ALBA practitioner Kerry was responsible for organising this and I really appreciate this kind gesture and the fruit was lovely.

Once again, thank you so much to everyone that came to see (you all know who you are) during this extremely worrying time for me, Kirsty and the family. And thank you to everyone else that has helped us and continue to be there for me.

It really was great to have visitors come to see me, but I would find at times that I was exhausted when they left.

All of us in the room felt the same way and once our visitors left we would usually rest/sleep. If I wasn’t tired I would go for a walk then rest.

I got on really well with all the guys in the room, especially David and his family. It turned out that his son-in-law is the Hearts FC midfielder Jamie Walker.

Everyone and their dug knows that I’m a big Celtic fan, however as were all ‘Jock Tamson’s bairns’ I had a good blether with Jamie and his wife Courtney. It was also very nice of Jamie to have his photograph taken with me for my One of Fifteen Facebook Page and Blog.

Good luck to Jamie with his career. He was a really nice guy and good with me. He also took on what I was telling him about One of Fifteen.

We would have our good days (I’m sure you know what I mean) and our bad days in the room and ward. If I felt that things were maybe getting ‘on top of me’ I would take a walk to the TV room. Sometimes this room would be used for some patients to get their chemotherapy treatments.

There were other times that a patient’s family were basically sleeping in the TV room as their dad wasn’t in a good way. I would use the room when the family would be in their dad’s room, and when they came back I would go back to my own room. There were times when the family would have a chat with me for a wee while, but I would leave after about 15 minutes or so as you could see that they were tired and emotional.

Other times I would sit in a wheelchair and take in the amazing views of our nation’s capital, Edinburgh, from the window at the beginning of the ward. When the festival fireworks were on, it was amazing watching them from that window. I thought that more patients would have been there to take in the fireworks, but it was only me and a guy from Penicuik.

Then some nights when I would struggle to sleep, I would either put the headphones on and listen to some music, or watch a movie or TV from my iPad.

Out of all the different times I’ve been in hospital, I found this time to be really hard. I missed Kirsty and Nathan but they were only a FaceTime call away, so that was good.

Finally, thank you to everyone within LOTHIAN NHS that looked after me. I will continue to champion our NHS as the service they provide really is “second to none”.

2 thoughts on “Thank You”