I noticed some Stagecoach staff standing outside their office. They were chatting away to a young woman and having a laugh with her. One of them asked me if I was needing assistance with anything. I asked them what time I could get a bus to the hospital and I was met with sarcasm. I just gave the guys a look and said “it’s just the type of answer I was expecting. Oh by the way, who exactly are you trying to impress here, as I certainly don’t find you funny”.

The whole tone from the guys totally changed, one Stagecoach staff member turned around and said, “Yeah sorry about that, there was no need for that”. The same guy then said that the Glasgow service at stance number (whatever) was leaving in a few minutes”. I then thanked the guys and headed off for the bus to take me to the hospital. A couple of the staff members said your welcome type of thing, where the other guys had the head hanging down.

I got to the Victoria Hospital for 10:45 and I then went to check in at the out-patients reception. There were 3 members of staff on duty and 2 members of staff were dealing with patients enquiries and the other staff member was on a phone talking to a patient. I knew that I was the next patient to be served.

It was really bizarre as I turned around for a couple of seconds and the next thing I saw was just totally ignorant. When waiting for a staff member to deal with you, there’s a yellow line for you to wait behind. This is designed to let the patients have some sort of privacy. As I turned back around there was a woman, in her early 70’s standing right behind where the other patients were being dealt with. This woman totally skipped the line everyone was waiting in, then a staff member stopped dealing with a patient and said to her, “With all due respect I am dealing with a patient right now. So please go and stand behind the yellow line”. This woman was fuming then she stood right in front of me.

Now I was brought up to respect pensioners and I wasn’t going to say anything as I basically couldn’t be arsed. Where I was standing was right on the yellow line, but the women then stood a good bit in front of me.

She then turned around and said to me, “Oh this is bloody hellish don’t you think?” Before I could answer, she then turned around to me and said, “Look, its that silly old man holding everyone up by constantly talking to the staff”. I just looked at her and said, ” As the woman said to you earlier, you should stand behind the yellow line so that you can give other patients privacy. Not only that, you skipped the whole line”.

The answer I got back from her was just amazing. ” I’m here for an appointment within the next few minutes and my condition is a lot more serious than a lot of people here”. I turned around and said to her, “Now how can you possibly say that. You have no idea why I am standing here along with the other patients. I have been brought up by my family to respect pensioners, however, I have none for you especially with an ignorant attitude like that.” Then I heard from behind me, “You tell her son,” , etc.

Her reply again was, “But its that man, the silly old fool is holding me back. Look at him, he’s already been told to move on and he’s still there”. I turned around and said, ” That man who is in a similar age group as your self might be completely lonely with no one to talk to. I bet you didn’t think about that as you’re so ignorant”. Just as she was about to say something, one of the staff then said, “Right sir how can I help you?” The look on the woman’s face was priceless. “I replied back to the receptionist, ‘please just serve this woman as she is really beginning to annoy me and I don’t want to say something that I will then regret later”.

The receptionist said to me, “Only if your sure as you were well before her,” I then nodded back to her and ” I’m sure, thanks”. Just then, I got a sarcastic “oh thank you, that was nice of you”. I couldn’t resist by saying, “As I said earlier, I was brought up to respect pensioners, so your very welcome’.

The instructions were basically, “Go to the right where the nurse is right now, then go upstairs, follow the yellow line, then the blue line, then turn left and that’s you”. I thought to myself, I surely can’t go wrong with these instructions. Oh, how wrong I was. I was walking around the place like a headless chicken, then a nurse stopped me asked me if I was ok. I told her I was more or less lost and she then more or less took me to where I was to go.

I arrived a good 30 minutes early, so I was talking to patients waiting for the same type of appointment. Then just as we were all chatting away, the doctor came and took me for my appointment.

Before getting the botox injections, we had a brief chat about how effective the botox had been. Then I got 2 injections, one of them into what remains of my right shoulder blade and the other was injected right into my back area where my rib cage was removed. I could then feel the botox going into my body. It was a right strange sensation.

I would be lucky if I was in the appointment for any longer than 8 minutes. As I was walking through the hospital, I took a slight ‘pain flare-up,’ so I sat at Costa Coffee for around 20 minutes. Once the ‘flare-up’ cleared I got a bus into Kirkcaldy town centre for some stuff.

I must have got home around for 15:00 and I was exhausted.

The date I go for my next botox injection is Monday 26th November 2019. So basically I have to get these injections every three months now. 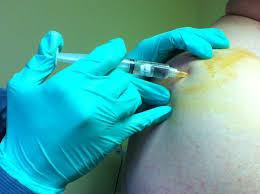 When it comes to me designing websites, designing posters, designing leaflets etc, then they really are nothing special. So an old friend of the family, Mikey did this for me. Mikey really is a good guy and a good laugh.

A few years ago, my wee sister Anne Marie (she’s my oldest niece) had a team in the Cancer Research Relay for Life at the Sports Centre Dalgety Bay round eight years ago. Mikey was in Anne Marie’s team.

Myself and my oldest son Jack were walking around with Mikey. Of course, me being me, I introduced myself to him as I didn’t realise who he was at the time and it had been years since that last time I saw him. Mikey just burst out laughing and said, `’don’t you remember that when I and my mum were visiting your mum and dad, you would see that I was bored and would say, ” Right bud, you any gid at video games?”. “Then I would say, ‘yeah I’m quite good” and you would say “come on then I will give you a gubbing”. Then we would set up your Nintendo in your mum and dad’s conservatory and we would play some games for a wee while”.

What a memory Mikey must have as when I was thinking about this recently I must have been about 17 or 18.

So thank you, Mikey, for doing this for me I really appreciate you giving my website a fresher look.

A new page called “IN THE MEDIA” has been included and every press article, magazine article radio interview and tv interview will be included there within the next few days.

Another page that I will be including on the website is: One of Fifteen’s Aims and also a USEFUL LINKS page.

On Wednesday morning, across the length and breadth of the country, some parents were cheering with delight and others were crying as it was the first day back at school. It was also the first day at school for thousands of kids. For the O’Neil family, it was Nathan’s first day in Primary 1 at Inverkeithing Primary School.

Myself and Kirsty both took Nathan down to Inverkeithing Primary School for Nathan’s first day. #TEAMO’NEIL were all perfectly calm, relaxed and no tear’s. Nathan was really excited about his first day and he was happy to see his wee pals that were at nursery with him.

Nathan’s old nursery, Treetop Family Nurture Centre, is based in the same grounds as Inverkeithing Primary and Inverkeithing High School. I have nothing but praise for the nursery’s staff, but in particular, the staff based in the Rainbow Room over the last two years. Not only have they been great with Nathan and his development, they have been great and really supported us as a family. This is something that myself and Kirsty really appreciate and we will continue to support them with donations of clothes due to Nathan growing at some rate.

When Nathan was settling in at school, myself and Kirsty jumped on the bus to North Queensferry and we headed to Rankin’s for our breakfast. I really like Rankin’s, it was my niece Anne Marie and her husband Colin that introduced me to the place about four years ago. I have been in there many times with Anne Marie, my sister Theresa and some of my politico friends. This was a whole new experience for Kirsty.

After a really enjoyable breakfast, and one in peace 😉 we went back for Nathan at 12:40. Nathan came running out of his class once his teacher knew we were there for him and he was really excited to see the both of us. Nathan told us that he had a really good day and that he has a good teacher. I’m really looking forward to hearing his wee stories of what he has been up to when I pick him up from school. 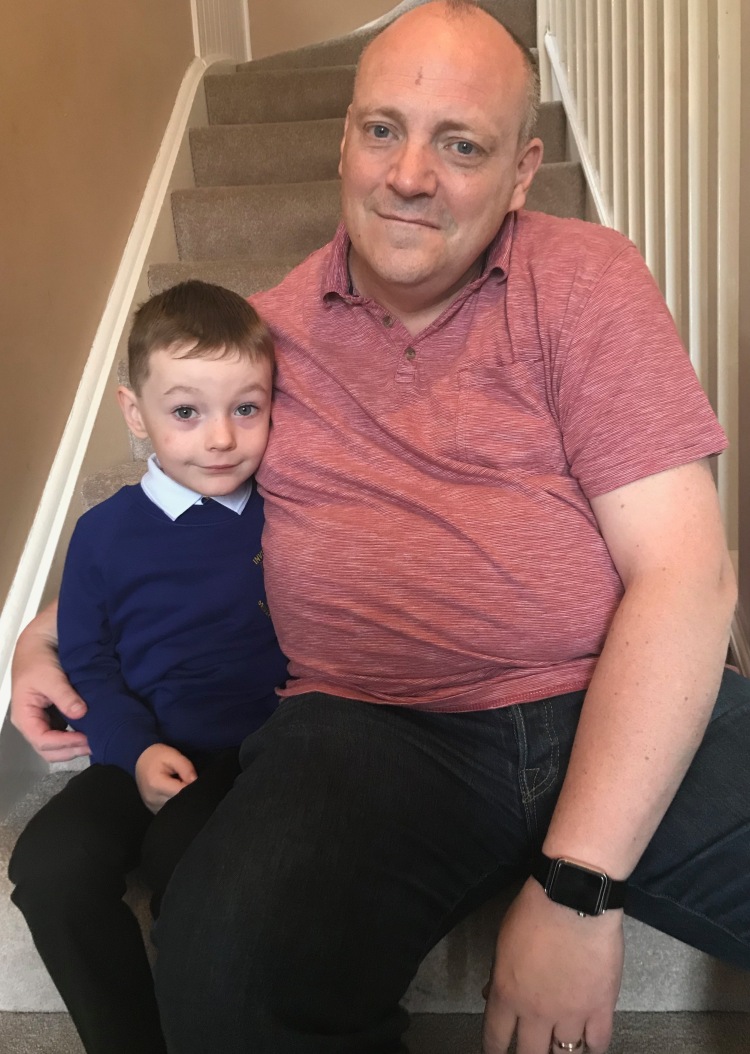 Once again, thank you for continuing to support the One of Fifteen campaign. Could you please share this with your friends on social media and could you please ask them to share this with their pals and for them to do the same. This type of campaigning has been successful due to the three men from various countries around the world that has contacted me to tell me that they have or also had malignant myopericytoma.

It is with your support and by you sharing my Blog, Facebook and Twitter updates that people with rare cancers, not just malignant myopericytoma, have contacted me. Thank you so much and I really appreciate your support.

2 thoughts on “BOTOX AND A BRAND NEW LOOK”