TEAM ONE OF FIFTEEN @ EDINBURGH KILTWALK

At 09:30 today (Sunday 16 September 2018) thousands of hardy souls will leave Holyrood Park Edinburgh to raise money and awareness for various charities across Scotland. They are doing this by participating in The Edinburgh Kiltwalk 2018

The walkers have 3 distances that they can choose from when taking part. They can sign up and do either:

There is a small Team @oneoffifteen taking part today and they are doing The Mighty Stride. This 24 mile route starts at 09:30 from Holyrood Park and it finishes at the Murrayfield Stadium.

Team members for Team @oneoffifteen are:

My wife Kirsty O’Neil and while I sit at home writing this and while Nathan plays; Humans Can’t Fly on the PS4 I can’t help but feel really proud of Kirsty for signing up to do this.

Joining Kirsty is Liz Calder from Burntisland. Liz is Kirsty’s auntie, she is a really nice person with a heart of gold. Liz has a great sense of humour and I am certain she will keep not only the team going, but also the walkers beside them.

Finally, an old mate of mine and the token male (only jesting :)) Roddy Johnstone joined Team @oneoffifteen. I have known Roddy for many many years now. My family lived in Concorde Way Inverkeithing for around 21 years and Roddy’s family were only a matter of a few doors away and they are a really nice family.

Before Roddy moved to our ancient capital Edinburgh, I would often catch the same train as him when heading to work. But I also know him well from when we used to get the Celtic FC supporters bus that used to leave from the Burgh Arms Pub in Inverkeithing. Depending on the mood after a Celtic game, Roddy would often lead the ‘sing a long’ on the bus from the ‘Vienna Bhoy’s Choir’ and he often encouraged me to sign a song or two to lift the spirits of fellow supporters.

I am so proud of Kirsty, Liz and Roddy for signing up to do this today. But it’s not just about them turning up and walking 24 miles for charity. The 3 of them have been out training and hammering in the miles for many weeks now.

Kirsty, Liz and Roddy are walking today to raise awareness and funds for the charity Maggies Centres.

When I was going through 30 intensive Radiotherapy Treatments at The Edinburgh Cancer Centre at the Western General Hospital Edinburgh, we used the centre several times. This in January/February 2012, not only could we go in and have a tea or coffee after my treatments, there is also many courses that you can do. Myself and other cancer patients used the centre as a ‘quiet place.

In January/February 2016 I was going through another 30 intensive radiotherapy treatments following on from the surgery I had in October 2015. This was when I had life threatening/saving surgery to remove the tumour from hell. Once again myself and Kirsty used Maggies Centre next to The Edinburgh Cancer Centre.

Then in July 2016 and November 2016, I was an in-patient at The Victoria Hospice at The Victoria Hospital Kirkcaldy. My first stay was for 14 nights and my second was for 17 nights. Even though Maggies Fife was a short walking distance from the hospice, I would go to Maggies depending on my mood and general health.

Maggies Centres, either Edinburgh or Kirkcaldy have been great with the O’Neil family and I can’t thank them enough. Please sponsor Kirsty at:

SOME PHOTO’S OF MY HEROES BEFORE HEADING TO THE KILTWALK

This photo of Kirsty was taken at 07:40 before Liz and Tony came to pick her up.

Liz and Kirsty just before they left to go to Edinburgh. I can’t wait to see them at the finish line.

Roddy looking well after a training session! Seriously though, Roddy is a really keen walker. When it was Father’s Day, he walked from where he lives in Edinburgh to see his dad in Inverkeithing. 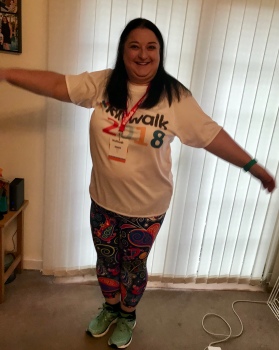 Kirsty full of fun before heading to Edinburgh

Roddy and his pal Bob