I first meet Kenny Maclaren on my very first day of employment when I was working for UNISON, away back in November 2003. We were both Information Development Officer’s and we were in the Policy and Information based at UNISON’s Glasgow office.

We became really good friends over the years I worked for UNISON and we still remain close. Kenny lives in Paisley with his with Mags and they are both councillors for Renfrewshire Council. Both are exceptionally hard working for their constituents and political party they are in. They are also well respected in the community they live and serve and by politicians across the political spectrum.

Like myself, Kenny suffers from ill health and he has had some close calls. I asked Kenny if he would be interested in writing a Blog, as guest, for One of Fifteen. Kenny also Blogs and you will find him at Rock and Rhetoric. I hope that you enjoy his Blog.

Ever since I’ve known Kevin, I’ve always found it amusing how often he slips song titles or lyrics into whatever he is talking about.  More often than not though he refers to progressive rock songs – some of which are more obscure than others – but there’s no denying that he links music to whatever is happening in his life at any given moment.

Reading his posts in the 1 of 15 blog you can see he is still at it, using music to  help express what he is feeling or what is currently happening with his recovery and long term pain management.

However, as much as I like music, it wasn’t until relatively recently, when I underwent emergency, life-saving surgery, that I fully realised just how important music was to me and how, I believe, it helped my recovery.

Without going into all the gory details, I was in some pain connected to what I thought was a blocked stoma and went along to the A&E department of my local hospital (the Royal Alexandra Hospital (RAH)) in Paisley to seek some help.  Two days later my consultant decided the only option was to carry out a laparotomy on me where, essentially, he would cut through my stomach muscles to check what was happening with my bowels and stoma.  Unfortunately, things didn’t quite go too smoothly and one operation became three operations over three consecutive days before the surgical team were happy with the results.

Of course, during all of this I was unconscious and unaware of the severity of the situation.  It was my wife (and our friend Will who accompanied her) that were left to worry about my prognosis and how I would recover from the operations.  They were worried that I may not recover from the treatment and I believe the second operation was very crucial and an important turning point in my recovery.  I only became aware of the severity of my illness as I slowly regained consciousness in the Intensive Care Unit (ICU), wired up to various machines, with an NG tube down my throat and a ventilator tube taped to my mouth.

As I lay in bed I found it difficult to focus on what was happening around me.  With the ventilator it was impossible to talk and all I could focus on was a clock on the wall next to me which seemed to move in slow motion.  The nurses were great and had told me when to expect my wife to come into the ward, as she had done during the four or five days I was unconscious after the operations.  Without being able to talk or even read anything (I wasn’t able to concentrate on anything) I found the time dragging slowly by. It was during this time that one of the nurses suggested listening to the radio to try and break up my day, to distract me from my current situation and to help keep me calm.  I can’t remember if it was me or Mags who suggested it but we managed to get the radio tuned into RockSport Radio – a classic rock (and sport) radio station operating out of Glasgow.  To be honest I wasn’t much interested in the sports part of the broadcast – especially as St Mirren were doing so badly and I didn’t need reminded of that – but I was keen to hear some classic rock.  I also knew that local rock icon, Tom Russell, had a show on this station. Tom built up a great following within rock music scene in the West of Scotland via his 30 odd years of his Friday night rock show on Radio Clyde and his stint as one of the main DJs in the much loved but now defunct Rock Radio (Scotland)

As classic rock from the likes of Whitesnake (the Moody/ Marsden version), Deep Purple, Judas Priest, AC/DC etc. started to fill my corner of the ICU I started to feel more relaxed.  No longer was I staring at the slowest moving second hand on any clock in the world.  No longer was I lying there focussing only on any pain or discomfort I was feeling.  Now I was listening to music I loved and starting to think back to the various bands I’d seen since I started going to gigs in the early 1980s.  It helped to break up the monotony of lying in a hospital bed desperate to get active but knowing I had no strength to even sit up in bed.  It also helped when I got the ventilator tube removed to give me and Mags something to talk about rather than constantly repeating the same conversation about my operations and how I was doing.  In the end, even a few of the nurses started to appreciate the mix of rock songs from RockSport Radio, saying that it was a lot better than the constant diet of pop music from other radio stations. Listening to RockSport’s varied playlist helped move my focus away from my pain and helped me think about getting home, picking up one of my guitars and making as much noise as I could!

It wasn’t simply a way of tackling the boredom of lying in a hospital bed, the music helped me to relax and through that helped me focus on getting better.  When I left ICU and eventually moved to a ward I made sure I had my phone charged and tuned into RockSport but also Planet Rock radio station and even accessing my Amazon Music playlists.

I’ve always liked listening to music, going to gigs as well as playing guitar but during that time in hospital I started to relate to Kevin’s experience of linking music to key moments in his life.

Once I got home one of the first things I did was contact Tom Russell to request any track by Shinedown (one of Mags current favourite bands) as a thank you to her and all the staff at the RAH who looked after me.  I also let him know that RockSport Radio had picked up a few more fans from the RAH.  And in case I had any plans for lying about the house taking it easy what song do you think Tom played…..’Get Up’ from Shinedown’s latest album! 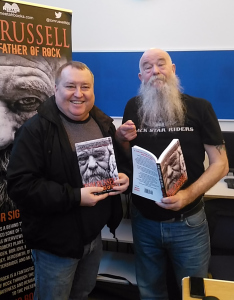